It is my pleasure to have Diane Alberts with me today, talking about her love of romance and treating us to an excerpt from her new book Kill Me Tomorrow. So sit back, relax, take five minutes to yourself and read all about it - the trailer is fab too. Looking forward to this one! 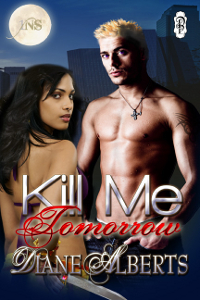 Why romance?
People often ask me why I write romance. Why the heck not? I love telling the story of boy meets girl. And I love all of the passion, lust, love, and even hatred that ensue. And, I will admit it; I am addicted to Happily Ever After. In a world where bad news always comes first, why not lose oneself in a happy love story? Sure, the hero might get beat up, and the heroine might be kidnapped…but it always ends happy.
If fairytales ended with: And then they got a divorce, and he married a woman thirty years younger than him, not many people would read them. I know I wouldn’t.
When Jasmine and Gavin, from my new paranormal 1NightStand book at Decadent Publishing called Kill Me Tomorrow, meet…they are enemies. She is sworn to kill him—and all he wants it to make love to her. Worse yet: how is she supposed to kill him when he’s the first man to make her feel passion?
What happens when the two enemies collide? I guess you’ll just have to read it to find out.

Kill Me Tomorrow is a paranormal romance book, in Decadent Publishing’s fabulous 1Night Stand series. The series revolves around the enigmatic Madame Eve who always seems to be able to find the perfect match for that special someone.
Blurb:
Jasmine Baruch is a jinn-a supernatural being who fights demons with fire. While that’s difficult enough, she’s got bigger problems. She’s a virgin, and in the jinn culture, that is sheer blasphemy. Jinn are supposed to be passionate, promiscuous creatures-everything she isn’t. Due to marry the next day, she takes matters into her own hands by using 1NS. But, like the rest of her life, nothing is easy. The man chosen for her, though incredibly gorgeous, is a demi-sanguine; a half-human, half-demon-her enemy.

Gavin Werbato is looking for an easy night of sex. Nothing more, nothing less. Instead, he gets a gorgeous jinn convinced it is her duty to kill him. He can certainly think of better things to do with her soft hands than murder. He need only convince her of that…

Can the fire sparked when these beings collide be controlled, or will it consume their world as they know it?
Excerpt:
She’d accomplished nothing at all.
Nothing.
A weight sank beside her on the bed, and she shrieked. She darted a glance at the door, but it remained locked. Of course it did— portals didn’t hold back demons.
“Good punch.” He laughed and rubbed his nose. “Some men might hold a grudge—but not me. I heal too fast.”
Indeed he did. A glance at his face revealed features as gorgeous as ever. This sucked for the self-pity party she’d been trying to throw.
She preferred him bloody and not so devilishly striking.
She groaned and dropped her head into her hands. “Why won’t you just leave?” He caressed her arm in a lazy, seductive way, and she shivered. “Stop that.”
His hand stopped moving, but he didn’t remove it. “Why do I have to stop?” he murmured. “Why do I have to leave?” He traced an invisible path leading up to her shoulder. From there, he grasped a curl and twirled it between his fingers, as if testing its elasticity. Her scalp tingled at his tender tug, and a jolt of lightning shot straight to her stomach, causing her to bite back a moan.
“Because….” She lifted her head, and turned to face him.
His eyes were so blue they were nearly purple, which, combined with his light blond hair, made him a lethal opponent indeed. How could she resist such a gorgeous creature, knowing that it might be her last chance to rid herself of her virginity? Yet, how could she say yes? “Because you are half demon, and I am a jinn. We are adversaries, you and I.”
“I’m not an evil demi-sanguine,” he assured her calmly. “I don’t rape, kill, or pillage. I’m unremarkably human—plus a few small details. But you are hardly normal yourself,” he drawled with a lazy grin. “And I’d like to make love to you.”