Here's the lovely Sommer Marsden sharing secrets and her new release, Lion Hearted - look at that cover! - Over to you Sommer... 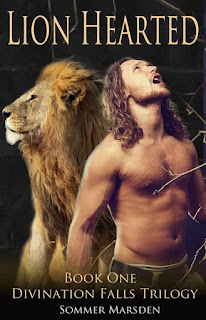 Secret Places…
And I’m not talking about your naughty bits! I mean hidden towns. Secret communities. Shifter havens. This is the basis of Divination Falls book one Lion Hearted. The final destination is a place not really  on any map. Not really in any human memory. It’s a secret.
Divination Falls isn’t the first secret place I’ve written about. I have “Town” in my book Big Bad. A town basically created and maintained (and patrolled) by wolves. So it was a natural leap for me—seeing as I get fixated on themes and even words, for goodness sake—to write another place that’s cloaked from humankind. (with a few minor exceptions)
I think there’s something wonderfully cozy about a secret hidden place. It has that safety aspect that is usually only found in books, rarely in real life—at least in my experience. Which makes it even better to savor and enjoy that sensation when reading a book to escape. Nothing beats a good story.
That being said, I certainly hope readers will find my little tale of shifter and empathy to be a good story. I hope that the reader will fall in love with this unlikely couple as much as I have. And that when all is said and done, Divination Falls will seem as tempting and picturesque and yes—more than a little bit perfect—just like it does to me when I write about it.
Do you have an imaginary place that makes you feel that cozy safe feeling? Despite all the murders *snort* Lillian Jackson Braun’s little town of Pickax is such a place for me. Or perhaps your place is real. Leave me a comment for a chance to win an All Romance Ebooks $10 gift certificate. I’ll go through all the comments along the Lion Hearted blog tour and draw a winner when all is said and done!
XOXO
Sommer

Blurb:
Tryg Avondale is the muscle for his pride, and when he’s called upon to hunt down two missing teens, he sees the job for what it is – a chance to give his pride a break from him and his “nature”. Tryg is a gay lion and it’s not something his “family” seems to embrace.

He takes with him Luke Dorchester – an empath and the perfect travel companion. Luke can feel and soothe every emotion that coils deep inside Tryg, and the sex between them is the hottest Tryg has ever known. Tryg has no intention of letting his emotions go any further when it comes to this brand new man. But he also has zero intention of letting him go. What follows is a road trip from campground to campground, hot nights in hotel rooms and close encounters spent together as they follow the scent of the two abducted shifters. A scent that takes them to Divination Falls, a haven for shifters and associated magical folk; a place where an old evil will surface and Tryg will learn just how far his love for lion-hearted Luke must take him.
Amazon US buy link
Amazon UK buy link:
Coming to all other vendors January 2013!