And, it's only 99p! All that smokin hot action for less than a cuppa!

The Billiard room is the story of seamstress Zoe Lake, who has come to a grand house to measure up for The Lady's new curtains. Just when she thinks the meeting is going well and that she is the height of demure respectability, the Sir of the house demands attention in his billiard room. Zoe is swept along on a wave of her own lust and finds herself on more familiar terms with green cloth and curtain tassels than even she is used to...

“Oh, I... I’m sorry Sir,” she stammered as she came close to him, “I shan’t be long.” His eyes dragged their way from her shoes to her legs, thighs, stomach and lingered lightly at her chest before settling at her lips which she subconsciously licked. It could only have been a footstep but she felt like the exchange had taken forever, what would his wife say, having her husband eye up another woman so lavasciously? What was he thinking? Zoe nipped out under his arm as he held the door open for her, never taking his gaze from her. Crunching her fists and eyes shut for a moment, she composed herself then walked off down the hallway, knowing full well that he was watching her backside and legs. The skin at her throat and décolleté flushed and prickled at being under such scrutiny. But there was something else. She managed to get to the large heavy door and pulled it open just enough to pass through, shutting behind her with a clunk. The flush had simultaneously spread up to her cheeks and down to her breasts. Zoe fought the urge to peek at her chest but lost. As she looked down to the peaking domes in her good blouse, she knew she was in trouble...

Hope it tickles your fancy!
If so - buy here 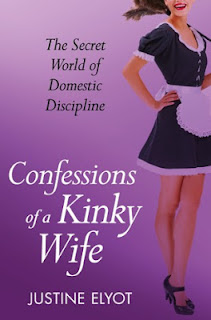 And if that's not enough - Justine Elyot is also having a Mischief release today - Confessions of a Kinky Wife is out now! It will be hot, hot, hot!
Thanks for reading T x