Crossfire of Love with Ella Jade

Hooray - today's an Ella Jade day! Here she is telling us about her new novel from Beachwalk Press, Crossfire of Love and why it was... 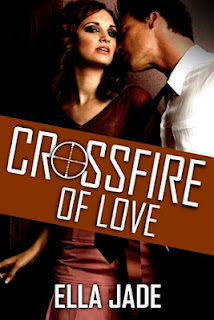 My new release Crossfire of Love was a real labor of love for me. It was a long time in the making. Like 22 years in the making. Now, of course I didn't know when I was 16, I'd eventually be an author. I'd always wanted to write, but I could never have dreamed back then that there would be something called the Internet and people would be able to read books on-line. If I had, I'd be in a whole other profession.

What am I talking about? Oh, yes, my new release. Let me go back to the beginning. I've always been intrigued by mob movies, books and real life history. I grew up in South Philadelphia in the early eighties. It was a tight-knit Italian community with lots of mafia activity. Naturally, being the curious girl that I was, I researched as much as I could on the topic. It wasn't as easy as it is today. Again, no Internet, and when a 16 year old girl walked into a library and asked for reference books on organized crime, a few eyebrows were raised. Hey, it was all in the name of research. The writer was born.

I lived for movies like The Godfather, GoodFellas and Once Upon a Time in America, to name a few. To this day, I'll watch anything Robert DeNiro is in. He was probably the first crush I had on a bad boy. And, Martin Scorsese is a genius. Just sayin'. 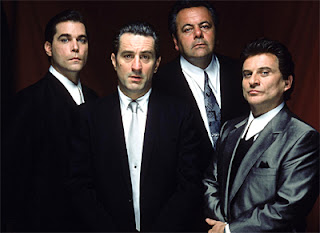 Here it is, 22 years later and I'm penning my first mafia themed story. There was a reason I was doing all that research, even if I didn't know why back then. Crossfire of Love is ultimately a love story, but it has a mob flair. The story begins when Gabriella is forced into an arranged marriage to Lorenzo, the son of a big NYC crime lord. It seems her father Ace has gotten himself into a bit of trouble with the Don and owes some big money. The head of the family offers him a way out. He'll forgive the debt if Ace's daughter agrees to marry his son. Hmm... I wonder how that will turn out?

I'll leave you with the blurb and excerpt…

Can an arranged marriage lead to love?
Recent college graduate Gabriella has finally married the man of her dreams, the older, charismatic attorney Lorenzo Martinez. She's had a crush on him for as long as she can remember and always imagined they'd one day find their happily ever after. Unfortunately, they enter into a union arranged by their fathers.
Lorenzo is charming, protective, and loyal to his crime lord father Carlo. When Carlo asks Lorenzo to marry Gabriella he jumps at the opportunity. He's been drawn to her for many years and knows by marrying her he's helping to protect her father.
Gabby is resentful and won't be Lorenzo's charity case. But sparks fly and the couple soon gives into their desire, realizing they were meant to be together.
What happens when Carlo's enemies threaten their future? Will someone get caught in the crossfire?
Excerpt
Lorenzo walked up the porch steps, turning to stare at her. "Are you coming, Gabriella?" No one but Lorenzo and his father called her by her full name. She liked when Lorenzo said it. He'd always made it sound so formal and sexy.
These were the first words he had spoken to her since they left the courthouse. They were married in the chambers of the prestigious Judge John Cartwright. He'd been a family friend of the Martinezes for many years. He was their go-to man whenever they needed something done fast and legally. Well, legal in her new father-in-law's eyes anyway.
She hurried up the steps and followed Lorenzo inside their new home. It was built within a matter of months after she'd agreed to marry him. Carlo wanted them to have their privacy, but he also wanted to keep them close. He didn't trust she'd hold up her end of the bargain, and keeping her on the property was the best way to ensure she wouldn't run.
It was silly, really. How could she run from a family like this? They had ties all over the world. There wasn't any place she could escape to that they wouldn't know about. She was a woman of her word. She said she would marry Lorenzo and she did. She'd find a way to cope. She always had.
Lorenzo pulled his jacket off, poured himself a scotch, and then loosened his tie. "Would you like a drink?"
"No, thank you," she said.
Most brides would be dancing the night away and drinking champagne by this point in their wedding night. She didn't think that was part of Lorenzo's plan.
"I didn't think you'd go through with it." He sipped the amber colored liquid as he looked her over.
"I said I would."
"I know, but when push actually came to shove, I thought you'd run."
"You don't know me that well," she said. "I don't run."
"Good." He smirked as he put the glass to his lips.
Gabby couldn't take her eyes away from those lips. She'd never had the pleasure of having them on her own. Judge Cartwright hadn't asked him to kiss his bride. She hated herself for thinking about him that way.
"You could've stopped this. Why didn't you?" she asked.
As they stood in front of the judge, she kept hoping he'd put an end to the charade and stop the wedding. It didn't make sense to her why he had agreed to marry her. She didn't have a choice. Her father's gambling debts made sure of that. But she didn't understand why he'd allowed things to get as far as they had.
"I was just as trapped as you were." He downed the rest of his scotch.
She didn't believe that. She knew he respected his dad, but she didn't get why he wouldn't have put his foot down and said no to such a life-altering decision.
"You could've told your father no from the beginning. Why would you agree to marry someone if you didn't have to?"
"Look." He shook his head. "It's done now. We're going to have to make the best of it."
"Make the best of it?" She plopped down on the leather sofa. "I'm twenty-two years old. I just graduated from college, and you want me to make the best of it?"
"I know this isn't what you might have wanted, but it is what it is. You agreed, and now it's done. You can't go back on it now. My father won't forgive that."