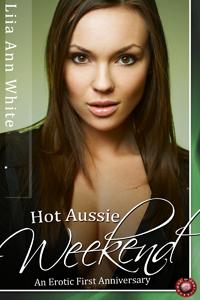 Newlyweds Jaycee and Campbell are stressed. Constantly working, trying to set up a secure future for themselves, they rarely spend time alone, enjoying each other’s company.

So, to celebrate their first anniversary, Campbell whisks away his wife on a romantic getaway where he plans to pamper her and lure her into the ultimate relaxed state. But what is his ulterior motive? What secret has he been keeping from his new wife?

Whatever it is, it’s guaranteed to be a weekend full of eroticism, love, romance and some surprises on a Hot Aussie Weekend.

Excerpt
Starting at her shoulders, Campbell worked his magic fingers down her body, massaging her tight, tense muscles until she felt like she would melt into mattress. He finished massaging her toes and ran his hands slowly up her legs.

Jaycee was unable to stop the moan that escaped her throat as she focussed on the movements he made. His fingers left behind a heated trail that aroused her again. Passed her knees, they made an intricate trail around her thighs and skipped to her hips and ass before moving up her back. Kneading the muscles on her shoulders once more, Campbell leaned down, his breath hot on her skin as he spoke.

“Roll over, beautiful,” he whispered into her ear.

With a small moan, she obeyed, her relaxed muscles protesting when she moved. Her eyes opened to find his deep blue ones gazing at her with adoration. Jaycee’s heart skipped a beat when she saw the love and lust he projected. Reaching up, she cradled his face in her hands and kissed him.

Their lips moved in leisurely movements, exploring each other’s mouths as Campbell’s hand roamed across her breast, cupping it before he rolled the nipple between his fingers. Jaycee’s mouth opened on a moan and Campbell took the opportunity to slip his tongue passed her lips.

Deepening the kiss, she tangled her fingers in his hair and pulled him closer. Arousal tore through her body like a wildfire, awakening muscles that moments earlier had been languid and relaxed. Campbell’s hand moved to her neglected breast and teased her nipple. Letting out a small moan, Jaycee brought her leg up, only for it to be pushed down and have Campbell break contact with her completely.

“You’re not finished with your massage yet.”

He grinned at her frustrated groan and moved off the bed to grab the massage oil again.

“You enjoying torturing me don’t you?” she whined when he returned and ran his oiled hands up her torso, settling them on her breasts.

“Yep,” he quipped. “Hands behind your head please. I know how impatient you are and I don’t want to trying to pleasure yourself before I’m ready to do it.”