Well hello there - have I got a surprise for you-hooo! 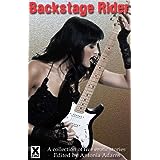 My newest release is a short story called The Gentleman including in the Xcite anthology, Backstage Rider - and guess what? - The whole collection can be yours on Kindle - for FREE! For the next couple of days only - so hurry hurry - get yourself a saucy night in for nowt!

Here's a little snippet from my story to get you in the mood for some saucy action with an older gentleman...

Deborah was used to getting what she wanted. So when one Bertram Tigworth Esq told her she was too young to hold his interest she made ready for war.
Too young? She was thirty-two! She’d had her eye on Bertram for quite a while now – he owned a terribly dull looking bookshop in a side street downtown. She knew he used to be a lawyer and his taste in books probably reflected his previous occupation. Not that she really knew for sure, since any tome she’d picked up in his shop was purely used to peer over and admire his immaculate presence.  Since he’d given her the brush off, Deborah was determined to have him. She’d never felt such attraction to a man before – he reminded her of her incredibly strict physics teacher at school, who she’d had a huge crush on. She would try her very best to get top marks by flashing him a dazzling smile as she turned in another half hearted essay – it didn’t work then either, he would sigh and pass her back a C- must try harder.  And now, fifteen years later, that’s exactly what she intended to do. She put on her most sophisticated pencil skirt and billowing blouse and sauntered past his shop daily, perfecting her Parisian gait. It made her wet just to walk by. Sometimes a trickle of moisture would make it down between her thighs and she’d snake her hips rubbing her juices over the flesh between the top of her legs. On more than one occasion a wolf whistle would come her way from the perpetual workmen and she’d haughtily snub it, glancing quickly to the open door of Tigworth Books behind her Jackie-O sunglasses. 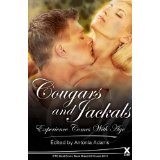 This story is also included in the full collection called Cougars and Jackals where you'll find TWENTY hot stories of lust from all your faves..
Posted by Tabitha Rayne at 11:59