It's Sunday! It's Snog time!
My internet is sporadic - non-existent at times - today is one of those days - so to mirror that I am giving you a Sunday Snog which is very sparse on the snogging... cheating a little bit really but they're kissing with all of their bodies!
Remember to link back to Miss Blisse's site for other glorious snogging action :)
The cliff felt suddenly very high and her vision wobbled for a second. Would it be deep enough? At this moment she didn’t care. She lifted her face to the sun and inhaled the rich scent of sea and desire, bent her legs and raised her arms.
Then she dove.
The water felt like ice cracking through her hot body, it engulfed her senses and she opened her eyes to the glorious glinting of sun igniting the underwater word. She began to swim and stretch for the shore when she spotted the shape of the man coming into view. 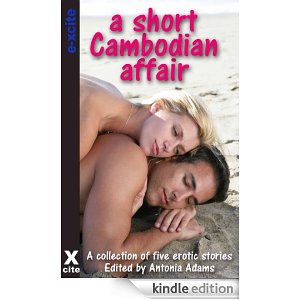 Thank God, she thought as he pounced on her like a shark. He grabbed her and pulled her into him. He was naked and his thick solidness pressed onto her skirt. He pulled it up quickly and Louisa wrapped her legs around him.
‘Fuck me,’ she whispered lasciviously into his ear. And she caught her breath as he grabbed her arse and plunged his full length right into her. Louisa shuddered and bit into his shoulder as he frantically thrust and humped her raw pussy in the water. She felt the force of the current pull and sway their entangled bodies but she held tight and let herself be taken by the strength of both him and the ocean. She opened her eyes to see that they were heading towards the base of the cliffs. He lifted her off him and held her against the steep wall of rock behind her. He pressed her into the stone by her shoulders and slid his gaze over her body. The soaking fabric of her clothes clung to her full, trembling breasts and he fell onto them, devouring them in his hot wet mouth. His tongue was strong and flickered over her nipples making them pucker and ache. Her skin tingled as he grabbed her top and pulled it roughly over her head and held her wrists above her, jammed into the cliff by the wet material. He held her there and pushed his pelvis into hers.

If you want to read more about how these two got it together - it's from a story called Sea View included in this mini anthology - A Short Cambodian Affair.

Now off you go and gather more snogs! Sunday Snogs... http://victoriablisse.co.uk/blog/sunday-snog/sunday-snog-rob-and-lous-wild-weekends
Posted by Tabitha Rayne at 09:09