It's the 1st of August - how did that happen? Forgive me, I'm in shock. I know the expansion of the universe is supposed to be accelerating but this is ridiculous!
August is going to be full of goodies for you lovely readers. I'm expecting to launch a new book and a fabulous Alfresco event is now taking place over at The Blisse's place - click on the banner above - prizes and books galore (with a big dash of outdoor sauciness).

But back to the here and now! In June, I was lucky enough to attend Smut By The Sea where I sat back, spellbound, and listened to the duo below perform this extract of their new book, The Journal... it was intense! So here they are - take it away Liv and Domitri

The Journal by Liv Honeywell and Domitri Xavier 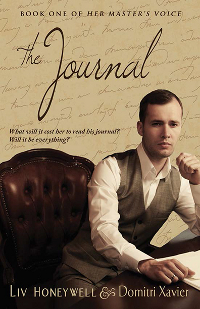 “Come to my study at eight o’clock sharp. Dress for dinner. Wear high heels and put on that dress – you know what I expect of you.”

When the order comes Livia is torn between anticipation and dread.

Does he know? How could he possibly know what she has done? And how can she find the words and the courage to tell him?

As eight o’clock edges ever nearer, Livia waits outside the study door, trembling; uncertain of what she will find when she comes face to face with her Master.

If he knows… If he does, there will be consequences. There is no doubt about that.

What will be the price for her moment of disobedience?

He heard the knock on the door of his study. This was her signal that she had complied with all his instructions, not a request to enter. She would come in when he said so and she would never dare to knock again.

He had asked her to dress immaculately, smartly; as if they were going to dinner. Her hair must be perfect, away from her face. Her make up flawless, perhaps to look a little tarty, but she would know how far to go and the penalties for going over the top. She would be wearing elegant, high heeled shoes.

He told her to come in, gently, softly; as if she were merely coming in for a coffee or cocktails. Immediately she stepped into the room; looking down with her hands behind her. She would never look at his face directly without his express permission.

She had no idea what to expect. Would he be soft and tender? Or would he sweep her off her feet by mauling her like an animal. She knew that her body was his and he could treat it in any way that pleased him.

He ran his fingers through her hair, gently folding it back and forth and her head moved with his every gesture. Then he thrust his fingers deep toward her skull and tugged at her hair, moving her head in all directions. She let out an involuntary squeal.

"This is no time for making such noises."

The quiet scream stopped immediately. She was under his power, his presence; his dominance. There was never any doubt about it.

He put his hands over her eyes and closed them, turning her face downwards. With effortless ease, he bound her hands behind her by her wrists and elbows. He loved the way that this pushed her breasts forwards and outwards. He had no need to bind her but it pleased him; a bound woman was an aesthetic pleasure.

He put one hand over her mouth. The other roamed over every contour of her body; her pouting breasts, her waist, behind her neck. He moved to her pussy and felt that it was already wet. Then both hands wandered quickly and powerfully over her whole body. She let out a yelp of pleasure which he immediately silenced with his strong fingers. She was his to do with as he wished.

I knocked on the study door, quietly, almost hesitantly. I knew so well the knots in the wood, the whorls and lines of the grain. How many times had I stood here, gazing at this door; trying to guess what would happen when I opened it?

I wondered how long he would have me wait. I didn't know what to think. Did he somehow know what I'd done? Had he been waiting for me to tell him, giving me the chance to own up? Hoping that I would before he had to make me? I couldn’t imagine how he could know, but... he had sounded distracted earlier. Not like himself.

I'd so wanted to confess. I really had. I'd tried all day yesterday. I'd tried today as well but I couldn’t make myself say it. I didn't want to see the look of disappointment in his eyes, the awful expression on his face that would come from knowing I'd done something absolutely forbidden.

And… and I was scared of the punishment, of how bad it would be. And now I’d made it worse. Not only for me but for him too. For how much more I’d let him down by not telling him the truth.

I hoped I could find the nerve to say it now. Maybe I could find a way to explain, though I wasn't sure I could explain it to myself. What on earth had I done?

I hoped he would allow me to speak, or I wouldn't be able to say a word, not even to confess. What would I do then? Wait until he was done with me and then tell him? Wait until he had used my body, whichever way he chose; wait until he had given me pleasure which I surely didn't deserve?

Then what? If I couldn't find the nerve now, if I hadn't found it earlier, what on earth made me think I would find it then?

I reached out and lightly traced the pattern of the wood with a finger tip. My hand was trembling and I slowed my breathing, doing my best to relax.

Then I heard his voice; such a beautiful deep voice, so calm and gentle. It gave me no clue to what he was thinking, to what he would do this time.

I took a deep breath and pushed open the door, closing it quietly behind me; keeping my eyes lowered the whole time. I clasped my hands behind my back and waited.

'Always,' I thought. 'Whenever you wish it.' I didn't say it, of course. I knew better than to speak without permission.

I kept my hands behind my back and walked over to him, my high heels clicking on the hard wood floor. I dared not look at him, but I so wanted to. Perhaps for reassurance that he wouldn't hurt me, although I knew he would; perhaps to see if the gentleness in his voice was there in his eyes; perhaps to search for something, anything in his expression to tell me what he was thinking.

He lifted a hand toward my face and I tried not to flinch, but he merely stroked my hair, twining his fingers through the length of it. I began to relax, leaning my head into his hand, until he grabbed a handful of hair close to my scalp and pulled hard, and I couldn't help letting out a small squeak of surprise.

"This is no time for making such noises," he said, still so calmly, so controlled, and I bit back the sound, unable to rid myself of the feeling that this was the calm before the storm.

His fingers gently covered and closed my eyes, and then I stood quietly while he tied my hands behind my back. Now I couldn't even see what was coming, and even if I could, I was helpless to prevent it.

He clamped his hand firmly over my mouth, stopping even the chance to protest, as his other hand explored my body, stroking and caressing - over my breasts, across my hips, between my legs. I blushed as I realised he must know how aroused I was.

He released my mouth and inspected my body with both hands, squeezing my breasts and my bottom, stroking my face, touching between my legs once more. I moaned softly and he covered my mouth again, muffling any noise I might make.

Was I not to be allowed even the slightest sound? To have to keep silent no matter what he might do to me? The thought of his control made me shiver and I swallowed hard, trying to hold back a sudden rush of desire. I tried to still myself, wondering if he had noticed.

Of course. Of course he had. He noticed everything. I wondered if it would make a difference to what he would do. If it pleased him that I couldn't hide my reactions or if I would be punished for moving, however slightly?

He stepped away from me and I waited for what would come...

When not writing about delicious, hot male dominants and the female subs who love them, I’m usually doing something craft-like, reading, baking, eating the results of said baking, and attempting to satisfy the demands of His High and Mighty Dominance (the cat!). My first story, Imagine, was published with Silver Moon Books last year and Coming, Ready or Not is my first solo book. The Journal was co-written with Domitri Xavier.

Domitri Xavier comes from a rich heritage, including Russia, France and Yorkshire. He is the quintessential English gentleman and lives alone in his cavernous mansion, Upton Abbey.

Domitri is not only a writer, composer, pianist, raconteur, wit and poet, he also enjoys a number of hobbies; he breeds Basset Hounds, plays chess (although he has yet to record a victory) and he is a renowned collector of used tea bags – Earl Grey, naturally.

The Journal is his first book and his poems have been published on Bitten Press’s website - http://www.akissofpoetry.com/211723089