Good day to you all! I'm very excited to have a fello Beachwalk gal, Tracey Rogers here today to talk about her new book, Best Fake Day...
First Love?
Hi everyone and thank you for joining me here today. 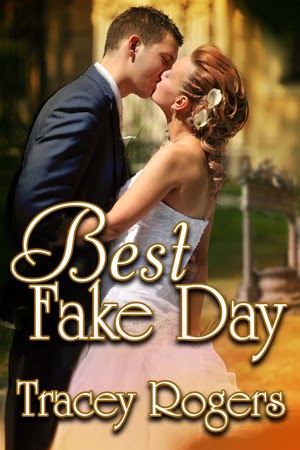 Hands up, who remembers their first love? I certainly do. That first love/crush sticks firmly in my mind. The scent of overused Brut (him not me), your first awkward kiss and the smoochy dances at the end of the school disco. Cherish by Kool & The Gang springs to mind for that one. Yes I’m looking back to the 80’s for this!
I don’t remember my first love because I’m still feeling it. Goodness no. That was an emotion that faded pretty quickly; but that first experience of teen angst will always stick with me. It’s a learning experience for sure. You think you’ll love that person forever and ever and your heart will physically break without them.
Except it doesn’t. You move on and learn from it. You finally realise that he looked nothing like Tom Cruise at all and you admit you never really liked his favourite football team, nor was it great fun watching him breakdance with friends.
In Best Fake Day Izzy Latham felt all of those teen angst moments, except she never lost the feelings she had for Jack Carter. When he turns up out of the blue all of those feelings hit her full force. She’s honest enough to admit it, even going as far as to lie for him, something she hates to do.


So do you remember your first love and how far would you go for them?
Blurb
Faking it never felt so good.
Wedding photographer and romance lover Izzy Latham dreams of finding her own happily-ever-after. When her former teenage crush arrives at her doorstep, looking sexier than ever, and asks to marry her, it should be her dream come true, right? Wrong. It turns out he doesn't want to actually marry her—he only wants to pretend to marry her.
Marriage hater Jack Carter will do anything to close his latest business deal, including finding a wife. The only person who can help him is his childhood friend, Izzy. Except Izzy isn't a little girl anymore. She's definitely all woman, and there's an attraction between them that's hard to ignore.
Jack has to convince Izzy to fake it, but the problem is that she hates to lie. However, she can't deny her feelings for him either. So when Jack makes her an offer she can't refuse, she reluctantly agrees to help him out.
Faking it is the easy part. But what happens when fake starts to feel so real?
Content Warning: contains sensual sex and occasional strong language


Excerpt
"Let me work off the money," Izzy said.
She felt Jack's gaze rake over her body, watched the clench of his jaw. "And how are you planning to work it off, Isabel?" he almost growled. "Is that what all of this is about?" he asked as his hand made an indicating sweep over her body. "Dress to impress so you can pay me in kind?"
"Oh God, no," she spluttered. "This is me showing you I'm not the weak, naïve girl I used to be and I won't be pushed around!"
The hard glint in his eyes softened slightly. "You were never weak. Naïve…" He trailed off. "So how exactly were you planning to pay me back?"
"Working here for you for free until I pay you back. I could collect glasses, work the bar, or clean."
"And you have experience in any of those roles?"
"No. But I could learn."
"But what about the house repairs?"
She shrugged. "I could do that during the daytime and work here at night. Then when I'm earning again from my day job I'll pay you back."
"And what exactly is your day job?"
"I'm a photographer. I could even do that here. Take photographs of the patrons and sell them for you."
"You work freelance?”
"I have my own business." She hesitated before elaborating. "As a wedding photographer," she said quickly, hoping he wouldn't snag the teasing opportunity.
Too late. The corner of his mouth quirked until it bloomed until a grin. "A wedding photographer. How appropriate. I knew playing dress-up with your mother's veil and having teddy bears as your guests would have an influence on you one day."
"You mean like wanting to have a traditional wedding where the groom doesn't have to bribe the bride? Yeah, my childhood messed me up real bad," she said with sarcasm.
"You're not working here, Izzy. And this conversation is over."
"No, it's not. I'm giving you a solution to paying off what I owe. I'll work off the amount Ellie paid for our debts and the rest you get from her. So when do I start?"
"You are not working here."
"Why?"
"Do you really want to have some guy groping you as you serve drinks? Or a group of guys? I run a tight ship and look out for my staff, but sometimes it happens."
"I can look after myself. I have been groped before, you know. I can deal with it."
He slid his chair closer, bending his legs so hers surrounded him without touching, but close, very close. He looked up at her under dark lashes. "So if some guy puts a hand on your leg you wouldn’t mind?"
She shook her head.
"And if that hand strayed beneath your dress?" he asked as his hand reached out to graze the sensitive skin of her inner thigh, making her shudder.
She shook her head slowly, earning a dark look. Of course she would mind. But this was Jack.
He stood abruptly, stepping into the v of her thighs. "And if a guy tried to kiss you?"
"I have been kissed before, remember?" she said, inwardly cringing at how breathless she sounded.
"I remember being a boy kissing you as a girl. If I were to kiss you now I wouldn’t be holding back and I wouldn’t be kissing you as a boy—I’d be kissing you as a man."
"Then do it," she demanded.


Author bio
A devourer of books from an early age, I spent much of my childhood stepping into wardrobes, searching for that magical snowy world where conversing with animals would be expected. When I wasn't searching for those worlds, I wrote about them instead. My first step into the world of romance was when I stole sneak peeks into my nana's books. I'm still in that world and refuse to leave.
I live in Staffordshire, UK, with my husband and three wonderful children. An avid reader and writer of romance, I strongly believe that words make the world go around.
You can find me here: http://traceyrogers.wordpress.com/
On Facebook
On twitter
Or email me at: traceyrogersaut@gmail.com