My gorgeous and talented friend, Lily has a new book out! Here she is to tell us all about it - I've read this woman's books and by jingo - they are hawt! x x 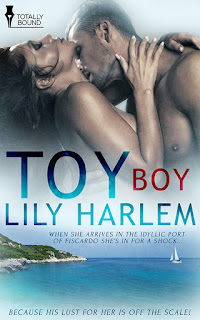 Toy Boy is Lily Harlem’s sexy new release and is out now! It’s a cougar story set in beautiful Greece and tells the tale of Kay and Sullivan on their ‘first’ date. Here’s the low down…

Getting something unexpected can be a shock, but it can also be a wonderful treat, if you allow yourself to indulge, that is.


Kay is bubbling with excitement. She’s booked a sailing holiday of a lifetime in Greece with a man she’s fallen for hook, line and sinker. They met on the Internet. She’s from Oxford, he’s from Washington State. She’s a business lecturer, he runs his own successful business.


They’re perfect for each other, and she can’t wait to meet him and spend time in and out of his bed, allowing him to seduce her for real and not just with softly spoken words over the telephone.


But when she arrives in the idyllic port of Fiscardo, she’s in for a shock. There’s a reason Sullivan’s photographs were grainy, and it’s not because he’s sporting a potbelly or balding as she’d suspected. It’s because he’s over a decade younger than her and could rival any Greek god in the looks department. What’s more, his sex appeal and lust for her is off the scale.


Should Kay take what she can with her ‘toy boy’ and have some fun in the sun or hop on the first plane back to England? It’s a tricky decision for a woman who believed she couldn’t be surprised by life anymore.

Buy from Totally Bound  Amazon Amazon UK and all other good ebook retailers.


My dreams were filled with blue skies, turtles and fluffy, white clouds that cradled around me, rocking me, soothing me, tilting me this way and that in a constant languid motion.
I saw Greek gods, islands rising from an aqua sea, and heard the sound of waves slicing around dolphins as they rose and fell from the water as if flying.
The images and sounds of my dreams faded, and reality broke into my consciousness. For a moment, I wondered where I was, then my foot touched the cool surface of the cabin wall, and I remembered that I was on Dolly Bird and Sullivan was sleeping up on deck.
I turned to my back and looked up at the skylight. The stars had gone, and in their place was a clear sky fractured by a length of white mast holding a taut sail.
I’d have to get up and grab a taxi to the airport.
The thought made me sad all over again. It could have been so perfect.
My body tilted slightly to the right, then upward and back down. The water in the harbor hadn’t been this rough the night before, and judging by the  cloudless sky, it certainly didn’t seem like a storm was over us.
I sat up and braced my hands behind myself, stared at my ruby-red painted toenails. Again I was jostled, not lots, but certainly more than I’d been the night before.
I swung my legs around, exited the cabin, then stood on the rocking floor of the small
seating area. I flicked open one of the drawn curtains. “What the...?”
All I could see was water. No land, no houses, and certainly no Fiscardo. Just an endless expanse of blue occasionally topped with a burst of white froth.
I spun around and looked out of the opposite window. It was the same.
Nothing but water.
I’m out at sea.
A wave butted the boat, and I lurched toward the galley and grabbed the counter for
support. What the hell was going on?
I was confused, not to mention dry from the wine the night before. I went into the
bathroom, brushed my teeth and splashed water on my face. After a quick gulp of bottled water, I headed up the small steps and pushed open the door to the outside world.
The glare of the sun hit me like a spotlight being turned onto my face, but I ignored it and climbed onto the windy deck.
“What on earth,” I said, holding on to the table and staring at the front of the boat, “is going on?”
Two white sails ballooned above me. Enormous and dramatic, they clung to the mast, ropes straining and groaning, reaching for the sky. 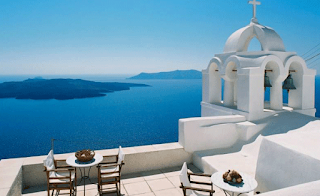 “Good morning.”
“What the hell do you think you’re doing?” I shouted, spinning and spotting Sullivan standing behind the large chrome wheel.
He wore nothing but his swim shorts and shades. The breeze had flattened his hair backward, and his shoulders and upper arms were tense as he held the wheel.
“Taking you for a spin,” he called over the breeze, grinning so wide his cheeks balled. “Like it?”
“No...no...and that is not what’s happening. Take me back to Fiscardo right now.” How dare he? Anger coiled in my stomach. It felt like my veins were suddenly too narrow for my blood.
“Can’t.” He shrugged.
“Of course you can. Turn around.” I put my hand up to shield my eyes and looked over his shoulder. In the far distance, I could make out land, rising giant-like from the sea. “Back there, take me back there.” I pointed, as a pounding beat set up in my temples.
“Can’t, the wind is blowing us this way.” He signaled to the sails. “We’re at the mercy of the gods.”
I held on to the rail that supported the Bimini and hoisted myself upward onto the main body of the boat for a better look at my location. The wind caught my hair and cooled my cheeks. I peered into the distance. “There must be a way, and I demand that you—”
He reached for my wrist, grabbed me, and pulled me down.
“Hey, watch it,” I said, gripping a metal railing that ran around the side of the boat. I was struggling to keep my footing and bumped against the table.
“No, you watch it.” He released me and gestured above me. “The boom nearly got you. Gotta keep an eye out for it. Wily sucker once the speed picks up.” He stepped away and grabbed the wheel again.
“Why did it do that? It nearly killed me.” I looked up at the scarily heavy bar that had ropes slipping upward. It had nearly chopped my head off. Damn thing.
“Probably won’t kill you,” Sullivan said, tightening something on his right. “But it will give you a thumper of a headache. Best you stay on this part of the deck for now.”
Huh, I had a headache already. Temper did that to me. “Not very health and safety conscious around here, is it?” I stepped behind him, as far away as possible from the lurching pole, and held on to the stern rail.
“Baby,” he said, still gripping the wheel but looking at me over his shoulder. “This is the big bad ocean. Danger lurks everywhere. Not even a guy with a hard hat and a clipboard can sort this out.”
I frowned at him. “Seriously, take me back. I don’t want to be out here.”
“I told you, I can’t. Besides, I want you to see some of the islands before you jump on a plane and leave me.”
“What?” I put one hand on my hip but kept hold of the rail with the other—the boat was skimming over the water, bouncing rhythmically. I couldn’t believe what he’d just said. He’d taken me against my will. He knew I’d wanted to get back to the airport today. Did he really want to see me lose it with him? “So you’ve just gone and bloody kidnapped me?”
He turned to me again and shoved his glasses to the top of his head in that cute way I’d noticed he did. He let his gaze settle on my face, then bit on his bottom lip, just a little—so I could see his top teeth—and let his attention slide over my body.
I glanced downward. Damn. I was standing in just my new, white underwear. It was pretty damn sexy with the lace detail and the balcony cups, because when I’d bought it, I’d wanted to look hot for him.
“Jesus, Kay. I’d say it was more like womannapped than kidnapped, wouldn’t you?”


"Kick off your shoes, shed your clothes along with your inhibitions and indulge yourself in a sensual adventure."


"What can I say but off the charts HOT!"


"Another fantastic book by Lily Harlem, she does such a great job of describing the characters and the place I could smell the sea and felt like I was on an island in Greece."


"A new romance book by Lily Harlem - no other words are needed, you just know it's going to be fabulous."


"Simply a beautiful, sexy, smile-inducing story that you will want to read over and over."


"An absolutely perfect book to read whilst pool side or lounging on a sun deck."


Oh the sun, the sea, the sex! Lily has a way of writing that puts you in the book. Her descriptions of Greek Islands had me day-dreaming I was on a boat, feel the wind and sun on my face, could smell the charcoal fires from the harbour side café's and taste the olives and wine.


Before turning her hand to writing Lily Harlem worked as a trauma nurse and her latest HarperCollins release, Confessions of a Naughty Night Nurse, draws on her many experiences while nursing in London. Lily also self-publishes and The Silk Tie, The Glass Knot,  In Expert Hands and Scored have been blessed with many 5* reviews since their release.


Lily writes MF, MM and ménage a trois, her books regularly hit the #1 spot on Amazon Best Seller lists and Breathe You In was named a USA Today Reviewer’s Recommended Read of 2014. Her latest MM novel is Dark Warrior.


Lily also co-authors with Natalie Dae and publishes under the name Harlem Dae - check out the Sexy as Hell Box Set available exclusively on Amazon - The Novice, The Player and The Vixen - and That Filthy Book which has been hailed as a novel 'every woman should read'.


One thing you can be sure of, whatever book you pick up by Ms Harlem, is it will be wildly romantic and down-and-dirty sexy. Enjoy!


Find Lily on the web.