Helloooo
This week's Wicked Wednesday prompt is Epiphany.
Now I had a bit of an epiphany last night about who reads my blog. I kind of bumble about thinking that most of those people would be folks and friends in the erotica writing/reading community.
But then, I was delighted yesterday when my lovely offline friend said she'd opened my subscription email at work and had to shut it fairly quickly... (I think we can blame Kayla Lords for the image she saw... could have been any of these - NSFW!) I had no idea she followed my blog! (Thank you darling x x made my day.)
Anyway - it got me thinking about who might read these posts - I did have a bit of an epiphany. I'm not sure many of my family members do... (um... hi mum...?) but it was such a pleasant surprise to know that some of my lovely friends do.
This post is dedicated to them and is an excerpt from my book Taking Flight where those who live far apart from each other can break free from their bodies at the point of orgasm and meet with their spirits no matter where they are in the world.
Love you guys x x x

Marcus was stirring as Deborah crawled in beside him and found a space tucked up under his arm. It smelled so thickly of him that her mouth watered once more, sending twitching bolts of excitement to her pussy. She was wet and sleepy and horny, the best state to be making love in, and she tucked the chocolate safely at the side of the bed and let her hand wander to her lover’s cock. Massaging his shaft in one hand and toying with her own nipples in the other, Deborah wondered whether she could take him inside her without waking him up. She lifted herself up as silently as she could, sliding her skirt up over her naked buttocks. He shuffled slightly as she straddled him, and she paused, holding her breath, her heart beating furiously.
Pain built in her thighs as she crouched, waiting for him to sink back into deep sleep. When she was sure he was gone, she lifted the tip of his cock and placed it at the entrance of her pussy. She was so wet now; she slicked his head with her juices before he’d even touched her. It turned her on to be so ripe and ready for him, taking control like this, when it was usually him dominating her. Her pussy walls were contracting in desperation, and she grasped his thick shaft and speared herself with it, swallowing him up entirely until their pelvises met and she ground her clit onto his fuzzy mound. Her hips undulated back and forth, pinning him and fucking him with all her might. Love juice poured from her, soaking their pubic hair and filling the shelter with their mingled scent. It was glorious, and as the bucking and spasming of her pussy pulled her awareness to that other place, Deborah forced her eyes open to try and take Marcus with her this time. To her surprise, he was staring at her, smiling, and she knew instantly that he’d been awake all along. He grabbed her bouncing tits and thumbed her nipples roughly as she started to come from deep within. His gaze held hers as if trying to keep her attention on him and not fly off. She felt tethered.
Come with me, Marcus, she silently implored as her orgasm broke free and surged through her body and out over him. As he held her, she was amazed as part of herself tore off and rode the wave of her climax, following it all the way down to meet his, where they roared together, meeting at that point. He stared into her eyes and she knew he was with her here and in that other place. Let go, let go, she told him without words. I’ll be there, waiting…
Light.
They were absorbed by the light they created and stormed around in it, coming again and again, around in and through each other. She laughed and danced in him and he in her.
He’d made it.

So there you have it - now,  if those two are apart, when they come - their spirits will find each other at the Meeting Point...
For more Wicked Wednesdays all about Epiphany - hop of over to Ms Note's place and see who else is coming out to play x xx 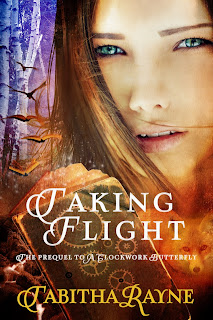