Tara Mills is at my Party!

My fortnight of fun and frolics at the Butterfly Party continues with a snippet of the new book from today's guest of honour, Tara Mills...
Read to the end or look to your right for offers and giveaways! x
Grading on Curves — by Tara Mills
Blurb:
One-on-one instruction never felt so right—or so wrong. 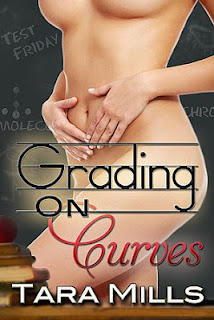 There’s nothing unusual about Mia Page’s attraction to the young science teacher at the middle school. After all, she’s not the only one who finds him enticing. But when he pulls her son aside to ask for her phone number, she knows she’s in serious trouble. Since her divorce four years earlier, she’s been out of circulation, choosing to focus on parenting instead, and she’s not entirely sure she can handle an entanglement with the sexy Mr. Walden.There are also other reasons why getting involved with Curt would be a bad idea. He’s two years shy of thirty, and she’s on the downside of that unmentionable number. He’s adamant about never having kids, and she has a son. Even the guy’s romantic gifts are suspect. Energy saving light bulbs? He has to be kidding.On the other hand, he’s fun, sweet, and smart. He stimulates her intellectually, emotionally, and Lord help her, physically, opening her eyes to life outside her comfortable world. Yet their differences quietly gnaw at Mia even while she succumbs to their undeniable chemistry.As their romance deepens, so do Mia’s fears that Curt will eventually hurt her. On edge, all it takes is an innocent comment to provoke her into drawing first blood. Mia recklessly wounds Curt, learning only too late that this blade cuts both ways. Frantic to make amends, she fears it might be too late to admit the feelings she’s tried so hard to suppress. 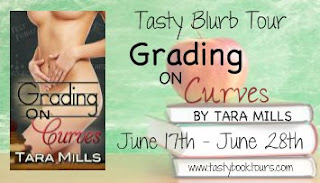 Excerpt:
Mia pulled against the curb and put the truck into park.
“Do you want to come in?” Curt’s eyes picked up the greenish glow of the dashboard lights and flickered seductively back at her.
The guy didn’t make things easy on her. Her heart wanted to answer yes but that’s not what her mouth was saying. “I would, Curt, I really would, but I can’t. It’s too soon.” The look she gave him begged for patience. “I’m sorry. I just need more time.”
“I understand.” Then he grew serious. “I don’t think it’ll come as a shock that I want to take you to bed, but I’m willing to wait, within reason, for you.”
“Within reason?”
His smile was back. “Well, you can’t expect me not to try,” he said, leaning in to take a kiss. “I’m going to do everything in my power to change your mind. But ultimately, it’s up to you. Let me know when you’re ready, okay?”
There was a battle going on inside her. She wanted to take him up on his offer now but this was such a big step for her. All told, Curt would only be the fourth man to ever see her naked, counting her old obstetrician. Intimacy with another man was suddenly a pretty terrifying thought.
Still, her heart raced like a hummingbird’s at the expectation in his eyes, the confidence that he was going to be her lover. If she was capable of lying to herself she might have felt offended by his presumptions but who was she kidding? She knew the minute she mentally undressed him that she’d be an idiot not to jump at the chance to get close to the real deal. Other women would have tripped her down the stairs for the opportunity he was offering. She’d already met one.
“I’ll keep you posted,” she said softly.
Curt’s smile warmed and he squeezed her thigh, giving her an intoxicating kiss that lingered on her lips after he drew back.
Mia’s eyes slowly opened and locked on his. The corner of his mouth twitched and she copied his expression. Curt leaned in again, but this time Mia took his head in her hands and kissed him first, feeling his hands bunch in her hair as they fed from each other one last time.
She was sorry when he slipped his hands free and turned to open his door.
“We’re still on for tomorrow, right?” Curt asked, looking back as he climbed out.
“Absolutely.”
“Good night, Mia.”
His glowing smile could have drawn moths if he stood still long enough, but he shut the door and strode across the grass. She put the truck into gear and pulled away, certain she was right to hold off, but miserable just the same.

She had no idea how she was going to make it through tomorrow.

Available now at Beachwalk Press, Amazon, Amazon UK, All Romance eBooks, Bookstrand, and Barnes & Noble.
Bio:
I'm a lifelong wordaholic, contemporary romance writer, pampered wife, and proud mom. Escape with me into books.
If you like fun and flirty, saucy and sexy, exciting thrills and suspense, or simply a good chuckle, I've got a story for you.
Author Links:


Tara Mills Romance, Facebook, Twitter, Goodreads, Amazon Author Page, and Beachwalk Press
Thank you for coming to the Butterfly Party Tara!
Remember for sales and giveaways for A Clockwork Butterfly click on these links:
Beachwalk is running a 50% off ebook sale of my novel (code ButterflyParty) and don't forget to enter the Goodreads paperback giveaway.
See you tomorrow x x x
Posted by Tabitha Rayne at 06:30