I Spy with Sommer 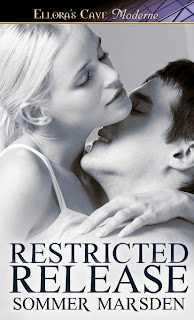 I Spy Voyeurism in This Book


I've always been one of those people who will say, Oh, I don't think voyeurism would work for me. Personally. Not my thing. But then I end up writing a voyeuristic scene and I go: Oh! I get it! Now I remember why people get off on this stuff.


There's voyeurism-on-purpose in Restricted Release and then, quite a hot scene, where the voyeurism is quite accidental. Until...ya know...Clara should turn away and stop watching but doesn't.


What is it about watching someone when they don't know it that's such a turn-on? Is it that they're vulnerable? Not putting on the face that most of us put on when we go out into the world? That we simply should not be looking?


Probably all of the above. All I can say is, Clara never considered herself very voyeuristic. Until she was a faced with this:


Nothing screws with your head like waking up in the dark without being able to remember actually falling asleep. I rolled to my belly. Six p.m. Streetlights threw white discs of light onto my bedroom wall. I heard a gentle tapping and realized it was rain—maybe even sleet—hitting my house.
“What the hell?”
I remembered being sprawled on the bed in a patch of sun and talking to Cat. I remembered hanging up and lying there, my mind playing over every slate-colored shade in the pencil sketch Matt had done of me. And then I must have dozed off. Since becoming single, my sleep usually came in violent fits and starts. We wrestled each other until sleep usually won and I went down fighting.
This time it seemed to have settled on me like a soft blanket. Another oddity for this strange day.
I climbed to my feet and my stomach rumbled. I was hungry. Really hungry. But first I had to pee. A spur-of-the-moment nap will do that to a girl. In the bathroom, I took care of business and washed my hands and face. Braiding my hair, I caught a flash of motion from the bathroom’s floor-to-ceiling window. When I peeked I saw a naked, toned Matt Millen stepping out of his shower. The man had no curtains yet.
“Score,” I whispered softly and laughed at myself. But I didn’t even pause to consider. I simply cut the lights and stepped up to the tall thick-glassed window.
Matt was a work of art himself. His back and shoulders were expansive and muscular. He sported some seriously cut arms and a chest that made me emit a little inadvertent sigh. Water glistened on his super-short hair and he ran his towel over it just once to dry it.
I shifted on my feet, the attraction I felt for him beating a steady rhythm in me. I was wet, I realized, and it gave an urgency to my emotions I hadn’t felt for a long while. Wanting him wasn’t just an abstract feeling at the moment. It was a true need. My gut instinct was to march over there and jump Matt like a crazy sex maniac.
“A sex pervert,” I snickered. Which was what Cat had always said when we were growing up and dating a new guy. I hope he’s not a sex pervert.
Only I was pretty sure—after a super-long dry spell and the bizarre instant attraction to this new man—that I was sort of hoping he was a sex pervert.
A kinky, kinky sex pervert…
He turned in profile toward his medicine cabinet and toweled off. His cock was semi-hard and impressive. These houses feel close together by nature, but you don’t know how close they really are until a moment like this one.
I used to joke with Mrs. Desalvo that if she ran out of toilet paper I could hand her a roll in a pinch. Now a nude man who I lusted after was in Mrs. D’s bathroom with a semi-erection. He felt no more than a gnat’s ass away from me.
It seemed utterly natural when I slipped my hand into my jeans and found my clit. It had been ages since I’d had sex but it has also been about a month since I’d even gotten myself off. And now—now my runaway pulse told me—I needed to get myself off. I needed an orgasm. It felt like a bare-bones necessity; it was as simple as that.


Like I said, I'll tell you I'm not a voyeur. I don't really get it. It's not my thing. But if I passed an open window with a tempting view do I really think I’d look away?


Should I? Yes. But should and would are two different things, now aren't they?