Beachwalk Press goes down under!
Join fellow Australian authors Imogene Nix, Jess Buffett, Larisa Anderson, Hazel Gower, and Susan Child as they celebrate Australian Day. From January 24th-26th, their books will be on sale at the Beachwalk Press website for 99 cents!

My third and final Australia Day guest is the lovely Hazel Gower - over to you Hazel!


Hello Everyone
I would like to say thank you to the host for having me.
This week is Australia day week. I love being Australian. We truly are the lucky young country. Most of my stories are set in Australia. My Armageddon mates is set in a small beach side coal mining town in NSW. I have picture below of the stunning little town. I’m sure you will agree it is the perfect location.

Beachwalk Press this year is helping you all celebrate this day with us. It will be offering the books written by us Aussie authors for a discount on the Beachwalk Press website. So make sure you drop by and grab a bargain!

Kane’s mate Blurb:
Faith's life has always balanced in two worlds—the normal human world and the supernatural.
Now she has to choose between the two. 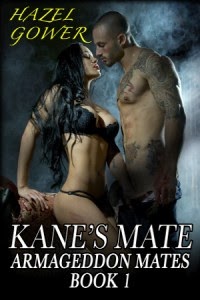 Faith York is human, but she has psychic powers, which is a little odd since neither of her parents have paranormal abilities. Thankfully, the werewolf family who lived around the corner help her learn to control her powers. She instantly fell in love with the entire family, but especially Kane, the oldest son who is next in line to be Alpha. Unfortunately, Kane doesn't see Faith the same way she sees him. Heartbroken, she leaves town.
When Faith returns from two years overseas, her parents throw her a welcome home party. Faith is shocked when Kane kidnaps her from the party and mate marks her. Now she struggles with the choice of whether to leave again and live a normal life—a life she yearns for—or stay with the man she's always dreamed of and live a supernatural life.
To complicate matters further, her psychic powers intensify and she begins to have visions of an upcoming demon Armageddon. Then she learns she was switched at birth, and she has a half-brother…who is half demon.
Faith must be stronger than she ever believed possible, and maybe in the process, she can trust herself to give Kane another chance.
Content Warning: Sexy werewolf alpha, graphic sex, strong language, and violence


Kane's Mate – Excerpt
It's so nice to be home, Faith thought. Her parents were throwing her a welcome home party, and she couldn't wait to see her second family. She had missed Jamie and his family so much. Faith's parents had picked her up from the airport yesterday, and she'd spent a relaxing afternoon with them. But tonight she hoped everyone she loved would be there, bar one. She couldn't see him, not yet, she needed time to settle, build up her walls against him. Faith shook her head and finished getting ready for her party.
Two hours later, the party had started and Faith was chatting to all her friends, but she couldn't stay focused on the conversation around her, because she was eagerly awaiting some of the most important people in her life. Her werewolf family was late, and she was starting to get upset.
She had been away for two years with only phone contact with the Wolfens. She never missed speaking to at least one of them every night. They were the reason she had come home, and why she'd left in the first place. It's not that she wasn't grateful to them, especially as they'd helped her learn to control her psychic gifts, but they always seemed to take over and overprotect her. She sighed and gave herself a little shake, hoping it would get her back into the conversation around her.
When Faith finally felt her wolf family arrive, she smiled, excused herself from the friends she was talking to, and ran outside to greet them. Faith kissed all the werewolves, and when she reached Jamie she jumped on him, kissing his cheek. "I missed my best friend so much," Faith told him.
Jamie chuckled. "We talked almost every day."
"I missed your hugs, and I miss your stupid jokes, they don't have the same effect over the phone." Faith kissed both of his cheeks.
She looked up and saw Kane first before she felt him. He was special. Faith loved her werewolf family, but the love she had for Kane was different, more intense, sexual, a love she felt to the bottom of her soul. The problem was, he didn't want her.
Faith looked over Jamie's shoulder, trying for a casual, "Hi, Kane."
She turned her head back to Jamie before she did something stupid like jump on Kane and kiss him to show him how much she loved him and didn't want to live without him anymore.
Without thinking of the consequences, she kissed Jamie on the mouth, trying not to put all her regret and self-hatred at loving Kane into it. Jamie seemed startled at first, but then he grabbed her arse to hold her closer to him, and he really got into it.
Faith wished she loved Jamie the way she loved Kane. God, she wished she felt something from this kiss. Nothing…she felt nothing for Jamie beyond friendship.
She sighed in thanks when her mother called her inside as she had an overseas caller. Faith walked into the house, not
daring to look back at the group, knowing if she did she would have to acknowledge what was going on.


Kane got out of his car and froze as chocolate and vanilla assaulted his senses. He looked for the source, terrified because he knew who it would be. His gaze fell on an absolutely gorgeous, grown-up Faith, and his wolf stood at attention for the first time in more than four years. It growled in his head mate, take, mate.
Kane stared at Faith as she greeted his family. When she came to Jamie she jumped on him, kissing his cheek. Kane fought with his wolf as he waited patiently for Faith to acknowledge him. All she did was look at him with a blank expression and say "hi" then turn her head to kiss Jamie on the mouth.
Kane snapped. He growled and lunged for Jamie only to be held back by his brothers, Rane and Arden. "Mine," he snarled as he struggled to free himself.
He knew he wasn't being rational. Jamie was his brother and Faith's best friend, but it seemed his wolf, and deep down he admitted to himself, he didn't care. The kiss ended when Faith was called inside. She excused herself and left without even looking back.
Jamie turned to him, and his face paled and his eyes widened as the realization seemed to sink in. Jamie screamed, "No, no, no, you can't have her. She can't be your true mate."
Kane surged forward again, and this time he found himself free. He got up in Jamie's face, making sure his alpha wolf showed, and bellowed, "Mine. Don't touch her again. Next time I will kill you, brother or not."


Bio:
I'm a mother of four terrors between the ages of two and seven. In my spare time, the little I have, I write and take off into my own worlds. As a child, I spent a lot of time in my own dream world. I even had an imaginary friend. In primary school I would constantly make up stories, which got me into lots of trouble. My mother said I always had an overactive imagination.


I started writing down my story ideas in high school, and never really stopped. Writing, I have to say, is my salvation. After I've cleaned up and gotten all the kids in bed, I sit at my computer—or sometimes a notebook with a pencil—and relax, write, and escape.


I love to hear from any of my readers, so feel free to send me an email and 'like' me on Facebook.

On Sunday, January 26th, they’ll be chatting in the Beachwalk Press Readers Group on Facebook. Be sure to stop by and get to know the ladies down under a little better.
Link to the Facebook Readers Group: https://www.facebook.com/groups/157739944430432/

Thanks for stopping by over the past 3 days! Hope you had fun with our Aussie gals x x x
Posted by Tabitha Rayne at 07:30