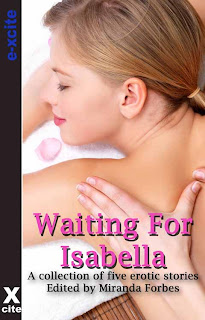 Hooray, Wanton Women from Xcite is available now - click for free read from the lovely Sommer Marsden.
My story, Roses and Figs, features in this book and also the ebook anthology Waiting For Isabella. Here's a sneaky peek...

Selena closed one eye and held out her arm, focusing on the end of her paintbrush. The woman lying naked before her on the silk-covered chaise longue was unlike any of her other clients. Usually when a woman came to her studio for a portrait, they would be nervous, birdlike, twittering with their hands trembling over buttons. Of course, Selena provided a screen and a robe to preserve their modesty but still most were self conscious and hesitant.

Selena would discreetly leave to make coffee while they were changing, asking that they make themselves comfortable.
Rose had been different from the start. Before Selena could open the door fully, Rose had breezed past in her thick floor-length cashmere coat.
‘Where do you want me?’ she had declared and opened the coat to reveal a mass of naked flesh. Selena couldn’t help staring as Rose let the single garment slide off her beautifully rounded shoulders and fall to the ground. She stepped out of the bundle of fabric in her heels and walked past the easel and over to the chaise longue. ‘Will this do?’ For her size, Rose was as elegant and graceful as a ballerina and sank softly into the cushions which seemed to catch her and lay her gently onto the couch.
Her pose was effortless and natural; she required no direction at all. Selena could only give a small shrug and whisper, ‘That’s perfect.’ Rose’s presence filled not only the sofa but the whole room and Selena found herself feeling quite overwhelmed. She had never met anyone as self assured as this sensual, mighty woman.
The canvas seemed vast and empty and, for the first time ever, Selena thought she might have stage fright.
‘Shall we begin?’ She smiled at Rose and retreated behind the easel trying to compose herself. Relax, relax, it’s just the same as all the other times. All you need to do is paint. Selena lifted her inked brush and held it out in front of her, repeating her usual mantra, Paint what you see, paint what you see.
But what she saw was magnificent. Rose had complete command over her body and had placed herself into a pose that showed off every curve and tone to perfection. Every angle, every joint, fingertip, toe had been very carefully and deliberately placed to display her rubenesque figure beautifully.
Selena always had a bowl of fruit featured somewhere in her paintings, a throwback from art school where still life and life drawings were her favourite. She’d always thought the flesh of fruit and flesh of the human was a beautiful combination. It was now obvious that Rose felt the same; she had lifted out some grapes and figs and had them cradled in the crook of her arm spilling onto her breast and nipple. Selena took another breath and gazed at the scene. She looked up briefly from Rose’s chest and caught her eye. Rose gave her a cheeky smile and squeezed her elbow in a little to push the fruit and breast out even more. Selena realised her arm was still in the same outstretched position and getting a cramp. She took the measurement and went to make the first mark on her page. Her brush hovered and her mind seemed to stop. All she could do was stare at the pure white of the canvas. Just paint!
Posted by Tabitha Rayne at 15:16