Smut By The Sea - released and available!

Well due to technical problemos (mainly human error) I am a couple of days late with this news...

On Friday, Smut By The Sea was released for your reading pleasure!

Hopefully I'll be bringing you snippets of other contributing authors in upcoming posts. As usual it's cheeky, saucy, good lovin' fun. 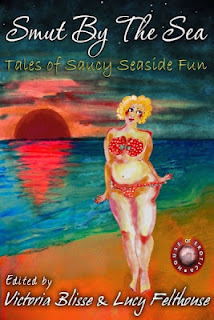 My story, Una's Retreat, is about a young woman escaping to a remote sands in search of solitude and relaxation - of course her plans go awry when a handsome stranger shows up...

Go on, you know you want one!

Here's a snippet from Una...


Raising herself up on her elbows, Una shielded her eyes against the sun glancing off the crystal sea. There he was again. She held her breath and took in every sinew of his tantalizingly familiar body.
For the past five mornings at precisely this time, while she’d been cultivating her tan, he had sauntered past like a racehorse in its prime.
He looked over and smiled, nodding in acknowledgement of her presence just as he had every other morning. This time though, Una felt brazen enough to return the gesture and was surprised at the heat that rushed through her bikini clad body, just by smiling hello. Each tiny hair on her skin lifted in turn and flowed across her body in a Mexican wave of sensation. Feigning disinterest as he dove into the water, she turned her head but kept her eyes fixed on to his athletic frame. When he was fully submerged she tried to recline in a sophisticated pose back on the hot sand and sink into relaxation.
A retreat. She’d fled the city, the unfulfilling job, the constant social pressure, the stress, the ex and come to a place that she thought, was guaranteed to be far away and remote enough to finally let go and even find herself – whatever that meant. Una had been feeling so crowded recently, never a space in her life to call her own so when this morning stranger had passed her way, she’d been disappointed at first – thinking him an intrusion to her comforting isolation. But when his sleek body had slipped through the water, barely disturbing the rhythm of the softly slapping waves, her senses had pricked and Una had watched in admiration as he swam off around the bay in lazy gliding strokes.
If she’d been a swimmer, Una might have followed him but the thought of land giving way to nothing but an abyss of liquid made her shudder...

Here's the full line up - Thanks for reading, hope you enjoy!