Justine Elyot is at my party!

Unlace that bodice and drop that waist - for the 1920s have arrived in style, courtesy of my most spiffy and rather naughty guest at the Butterfly Party, Lady Justine Elyot...

Why? Because there's plenty of those kinds of goings-on in my new Mischief novel, Secrets And Lords, and it's on my mind. So let's party like it's 1920!

First of all, you need your massive stately pile, with landscaped grounds including (importantly) a lake.

Then you need a fleet of servants: butler, housekeeper, cook, valets, maids-in-waiting, housemaids, chauffeurs…the list goes on and ends with the poor rough-handed scullery maids, spending their lives in hot water. 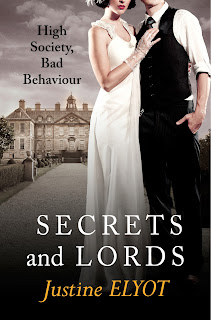 You'll need to do a lot of preparation – there are menus to be discussed and the provisions bought. Invitations, all hand-written, and sent by post. (Do be careful not to invite Lord Markley if Sir Gryphon Winstanley is to be of the party – they've never got on since that incident at the Fosco-Fortescue grouse shoot.) Beds made up. Entertainment arranged. The list goes on.

All this rigmarole pays off, though, in that perfect moment when your guests are assembled, all spiffingly attired, replete with your marvellous food and lost in admiration of the host and hostess. You stroll in the gardens, listening to the strains of that popular new American band drift overhead, the clarinet vying for supremacy with the trumpet, and enjoy the mellow scents of a summer evening.

Make sure you don't stumble over that couple behind the box hedge, though…

Blurb
The summer of 1920 brings illicit liaisons to stately home Deverell Hall. Lords, ladies, butler and maids all succumb to the spirit of the roaring 1920s as sex and scandal take over.
From the author of bestselling Mischief titles ‘Kinky’ and ‘Game’, Justine Elyot’s ‘Secrets and Lords’ is a historical erotic novel that will seduce anyone who loves period drama Downton Abbey and delight fans of The Great Gatsby.
Lord Deverell's new wife has the house in thrall to her theatrical glamour. His womanising son, Sir Charles, has his eye on anything female that moves while his beautiful daughter, Mary, is feeling more than a little restless. And why does his younger son, Sir Thomas, spend so much time in the company of the second footman?
Into this simmering tension comes new parlour maid, Edie, with a secret of her own – a secret that could blow the Deverell family dynamic to smithereens.

Thanks Justine - sounds rather like my kind of party - what what!

To hear more from this gorgeous lady - here's that all important website http://justineelyot.com/
And click if you'd care to buy a copy of Secrets and Lords which happens to be totally free right now...

Thanks for coming along - now go and pop that champagne and get the Charleston on - as I for one, am ready for a dance!