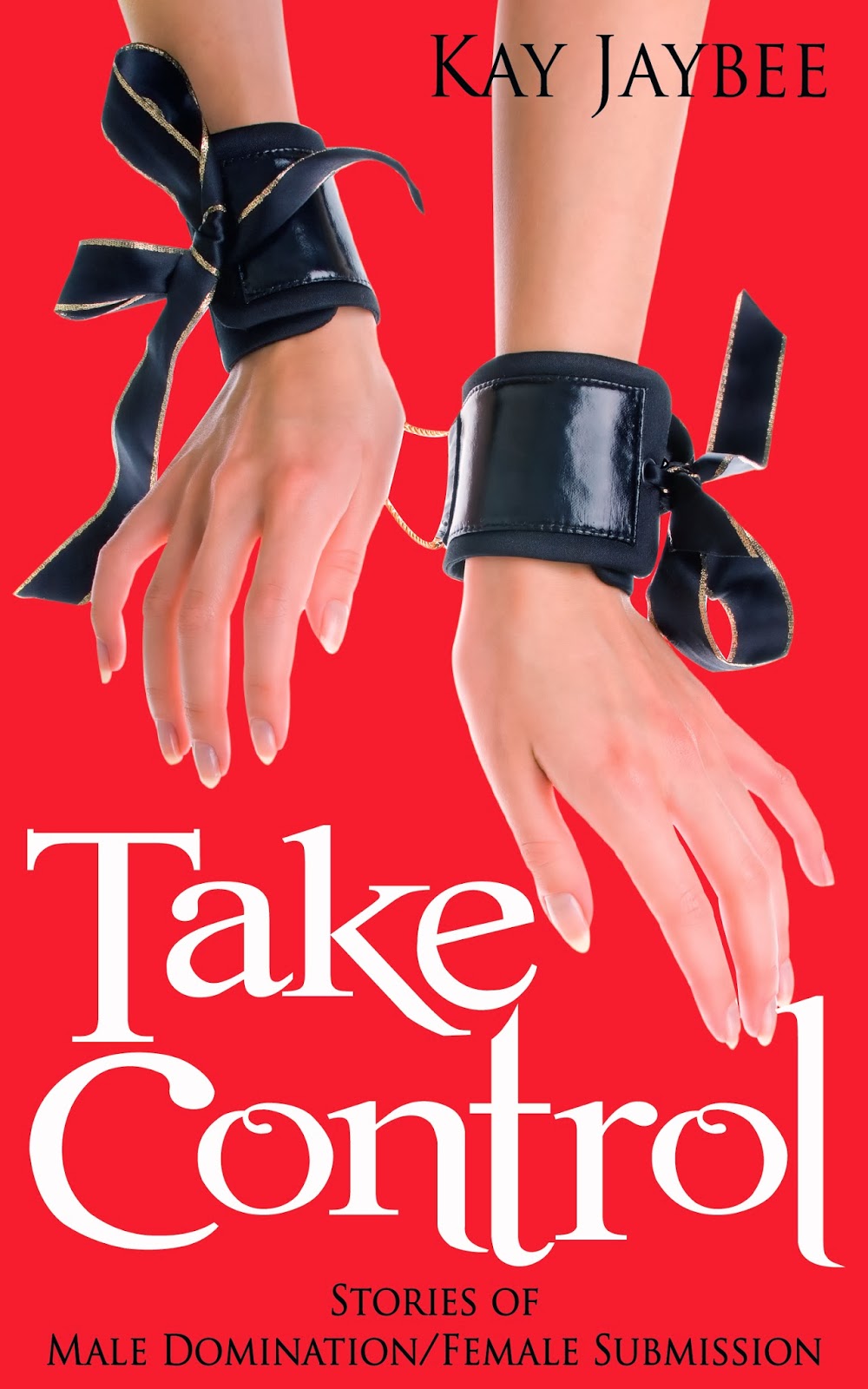 Many thanks for letting me come and share a little from my brand new anthology, Take Control,

Over recent years I have earned a reputation for writing punchy Fem Dom tales. This collection

however, switches my usual character roles, and it is the turn of the men to take the upper hand.

tales of bondage and female submission from the pen of best selling writer Kay Jaybee. From a

fantasy in The Necklace, Take Control offers five bite sized stories that will satisfy any lover

Here's an extract from Dinner With Tess

Tess was aware she was being watched.

As she danced, she became increasingly self-conscious under the

Signalling through the deafening noise of the club’s heaving dance

floor, Tess managed to communicate to her friend Claire that she

wanted to sit down. Tess was sure that if she stopped dancing, the

man would find someone else on whom to focus his unnerving

She was wrong. He continued to observe her, unblinking, as

having purchased some much-needed refreshment, Tess and Claire

leant against the stainless steel rail that surrounded the club and

surveyed the throng cavorting before them.

‘Do you see that guy over there?’ Tess asked Claire as discreetly as

the musical din would allow. ‘No, don’t let him see you look! He’s been

watching me for ages.’

‘Lucky you!’ Claire ignored the worried edge to her friend’s voice

and grinned approvingly towards the tall, thick set, casually

‘A bit daunting, though, don’t you think?’

cautious bone in her body, stared directly at the stranger. ‘If he’s

interested in you, go for it, have a fling. It looks as if he’d give you a

‘Claire! Really! He’s way out of my league.’

‘Don’t be such a mouse! You’re a good-looking lass, smashing red

hair, cute little body. Relax a bit, will you?’

Tess risked a glance in the stranger’s direction. She felt her pulse

quicken anxiously as he noticed her furtive look, and with slow

purposeful movements, approached. When he told her his name was

Jon, and that he was going to buy her a drink, Tess’s mouth hadn’t

been able to find the words to say anything, so he’d simply gone and

From that moment, she had been ensnared, hypnotised by Jon’s

strength, his quiet authority, and the promise of an undiscovered lust,

which seemed to reflect back at her from his deep shining eyes.

Tess had spent the early part of the morning in the kitchen. This

was to be the first time Jon introduced her to his friends, and Tess

had suggested she cook for them. A roast chicken perhaps?

Something warm and welcoming to greet them on their return from

the photography club meeting they were attending.

sounded exactly like something they’d all appreciate. Tess had been

thrilled when he congratulated her idea by fucking her

unceremoniously against the kitchen door.

She’d never met anyone like him before. Jon seemed consumed by

lust, and, even though it had been almost a month since they’d met,

Tess still found it hard to believe she was the centre of his attention.

As he was obviously a dominant man, she had been quickly awarded

the role of submissive; and to her surprise, and perhaps aided by her

natural reticence, had discovered that she rather liked being told how

to behave, what to wear, and what to say.

as Tess went to greet his friends.

‘Here she is!’ Jon’s arm swept around his girlfriend. ‘Tess, meet

Jack and Ed, my friends from the club.’

‘Hello.’ She spoke clearly, trying to cover her shyness. As she

shook their hands, Tess couldn’t help feeling uncomfortable by the

way they looked at her. It was as if they were assessing her in some

way, and she suddenly felt very aware of the shortness of her denim

skirt and the thinness of her white cotton blouse.

A private shiver shot up Tess’s spine. Do well for what?...

If you'd like to find out what happens to Tess, you can buy Take Control from-
http://www.amazon.com/dp/B00HYI8BHA

Details of Kay’s work, past, present and future can be found at www.kayjaybee.me.uk