**Blog Update! - This was chosen as the one of Marie Rebelle's Wicked Wednesday's top three of the week!**

This week's Wicked Wednesday is 'introduce' - well I would like to introduce this new story to you all. It's included in Best Women's Erotica Volume 1 which launched on Jan 12th...

Here's a little snippet from my story, Enter Me...


Even before the crash I'd never been a fan of not hearing clearly. I tried wearing headphones to listen to music but it made me feel claustrophobic, isolated. I get the same thing with sunglasses. I can't bear them, they make me feel like I'm in world of my own where no one can reach me, like I'm suspended somewhere other than reality.
So that's why, since the crash, you will never see me wearing sunglasses or even a hat. Anything that cuts me off from feeling in the thick of the here and now has me panicking.
The crash left me suddenly and utterly deaf. It was the strangest sensation coming round. I felt like I was deep underwater unable to make contact. The sound of my own voice was muffled and thick, so alien and far away I screamed. I knew I was screaming because my throat was raw and nurses in blue cotton pajamas were smoothing their hands over me and petting me, their brows furrowed with concern.
That was over two months ago.
I still wake up with that feeling of panic. Sometimes though, I let myself lie in the morning stillness, trying to be as quiet as possible with shallow breaths so I know, for a little while at least, that I am choosing the silence. It is mine.
I don't know how long George and I will last. He must be sick of the bruises I inflict when he's trying to catch my attention by tapping my back. The shock! I have not been able to master the art of not being panic stricken by an unexpected touch. It's exhausting, straining to hear all day long when all there is is stifling black nothing. So disorientating. I saw a program once about a room that was so well sound proofed that there was no echo at all. When the lights were out, people could only last a few minutes before demanding to be released from the black hole. George said he thought he'd love that – he'd do anything for a bit of peace and quiet, he reckoned he'd last a good eight hours. I knew what they were feeling though – I imagined it so keenly at the time, and now, it is confirmed to me. If I close my eyes, I'm there, in that room of absolute nothing. Alone.
We've taken to notes, or texting. Being unable to hear my own voice means I can't risk the words coming out. George says I sound fine. I don't believe him.
George left a note this morning.
Let's make love. Tonight.
I hold it between my thumb and forefinger. You wouldn't think not hearing would rob you of other senses, but it does. I can feel the paper, yes, but I can't hear the feel of the paper. Try it now, go on, rub your fingertips over the pages of a book, or a newspaper. Listen to how it feels. Now try to imagine not hearing that. See? You're surrounded. Your world is full of senses interacting and well, making sense of everything. I begin to fold the note up, slowly creasing it into a plane. The paper is rough and crisp, and I drag my nail along the folds making them sharp and perfect. Something about the points and lines makes a shiver run up to my solar plexus. I open the note back out and trace the words.
Let's make love. Tonight.
I try to savor the text without worrying how it should sound. I lift the note to my mouth and run my tongue over the letters, hoping to taste words. The shiver has become a flutter and travels gently down my abdomen and settles at my crotch. I let the sharp edges tickle my lips and the tiny hairs at the corner of my mouth. It makes me twitch and salivate. The prickle and swoosh of my breasts alerts me to my stiffening nipples and I look down to the rise in my shirt.


It's been so long since I've felt arousal, I'm taken by surprise, guilt almost. I make a decision. We will make love tonight... 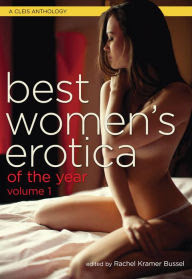 Like I say, this is part of Best Women's Erotica Volume 1 edited by Rachel Kramer Bussel and I'm very excited to have it included. I used to gaze and yearn while reading the 'Best Women's Erotica' books and wonder if one day I might be able to send in a story that would make the grade.

Remember, it's Wednesday - there's a whole load more wickedness to be experienced! Click here or on the sexy rainbow above.

Thanks for reading x x x
Posted by Tabitha Rayne at 09:16